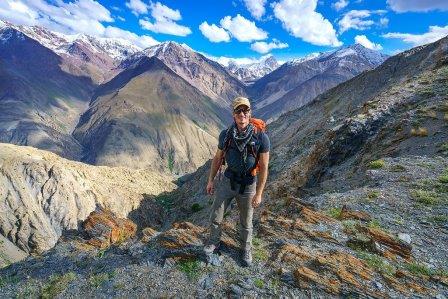 Wakhan valley is one of the wildest landscapes on our planet. It is 210 kilometres long and between 20 kilometres and 60 kilometres wide valley splitting the Pamir Mountains from the Hindu Kush and named after Wakhi people who inhabit the area. It is mostly known for Wakhan Corridor - a result of the Great Game played over the Pamir mountains between Tsarist Russia and England.

Originaly an Indian territory, Wakhan was given to Aghanistan to create a buffer zone between Russian Pamir and British jewel in a crown - India. British were upset with Russia's successful gains in Central Asia and really didn't want them to approach India - the richest colony of Queens Britain. At some moment Russians appeared on the borders with Afghanistan and claimed territories north of Pyanj to be under Russian Empire rule.

The first British response to this revived Russian activism was as we have seen to agree to the formation of a Boundary Commission. By September of 1885 agreement was reached between the Russians and the British on the need to reach a final settlement of the boundaries and respective spheres of influence in the Pamirs. Two years after the final minutes was signed and the Russian-Afghan border wakhan valley and pyanj river was demarcated from Gerirud river to Oxus and the transfer of the territories was complete.

By this minute British received south Pushtun territories and set the border along so known Durand line which Afghan government do not recognize till our days and Afghanistan received Wakhan in the north west which separated Russian territories from British India. Wakhan keeps a lot of monuments worth to see and many of them are now described here on our website.

Do You Have any Questions?