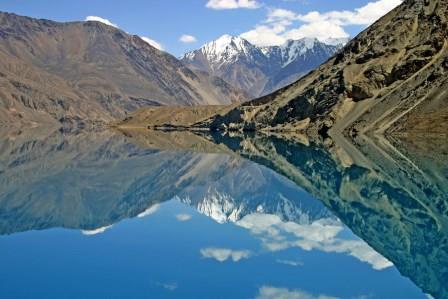 The Lake Sarez is one of the most beautiful and mysterious lakes of Tajikistan, which area is 80sq km and 60 km long. The gem of the Pamir Mountains is called “Sleeping dragon”.

In winter 1911, a huge landslide that happened in the mountains of the Pamirs, in the south-east of Tajikistan, which fully blocked the valley of the river Bartang (Murghab) – the upper reaches of the river Amudarya. Formed as a result of an earthquake the obstruction was named Usoy. The village Usoy was fully buried under the debris of the rocks with its inhabitants. Beside the village Usoy which was demolished by the fallen mountain, another four villages (more than 50 households) were fully destroyed. This obstruction is the highest dam in the world (567m, volume 2,2 km3). Behind the formed dam a big lake started to form which in October 1911 swallowed up the village Sarez; afterwards the lake was named after the village. No one knew about this neither in Khorog or in the Pamir post. The massive obstruction utterly destroyed simple “artificial construction” made from poles in the form of staircases and balconies, which are usually made by locals on the impassable areas (ovring) for maintaining communication across the valleys. In 1911 the water increased in 36cm, in 1915 – in 18cm and in 1934 in 10cm per day.

Do You Have any Questions?